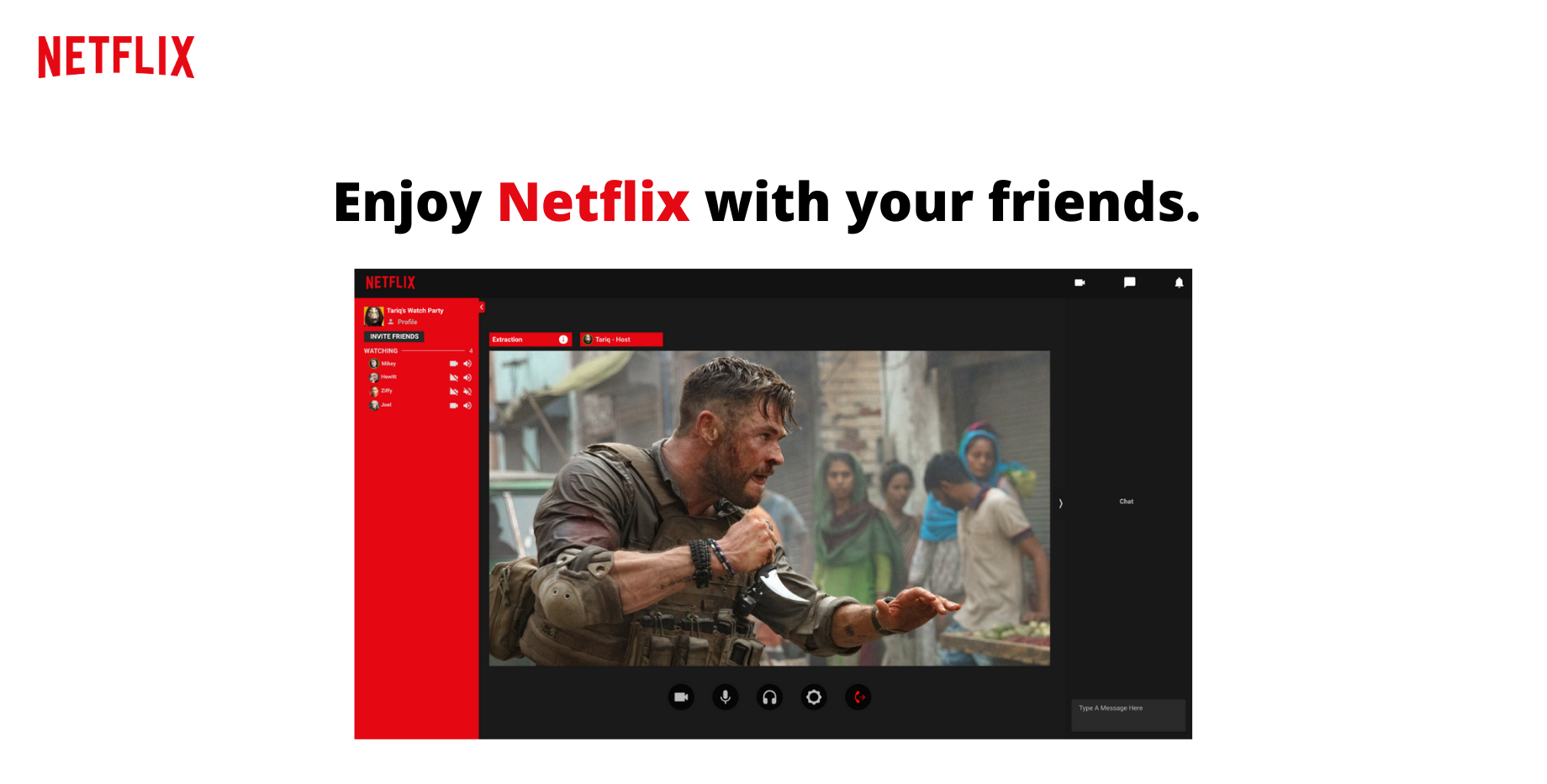 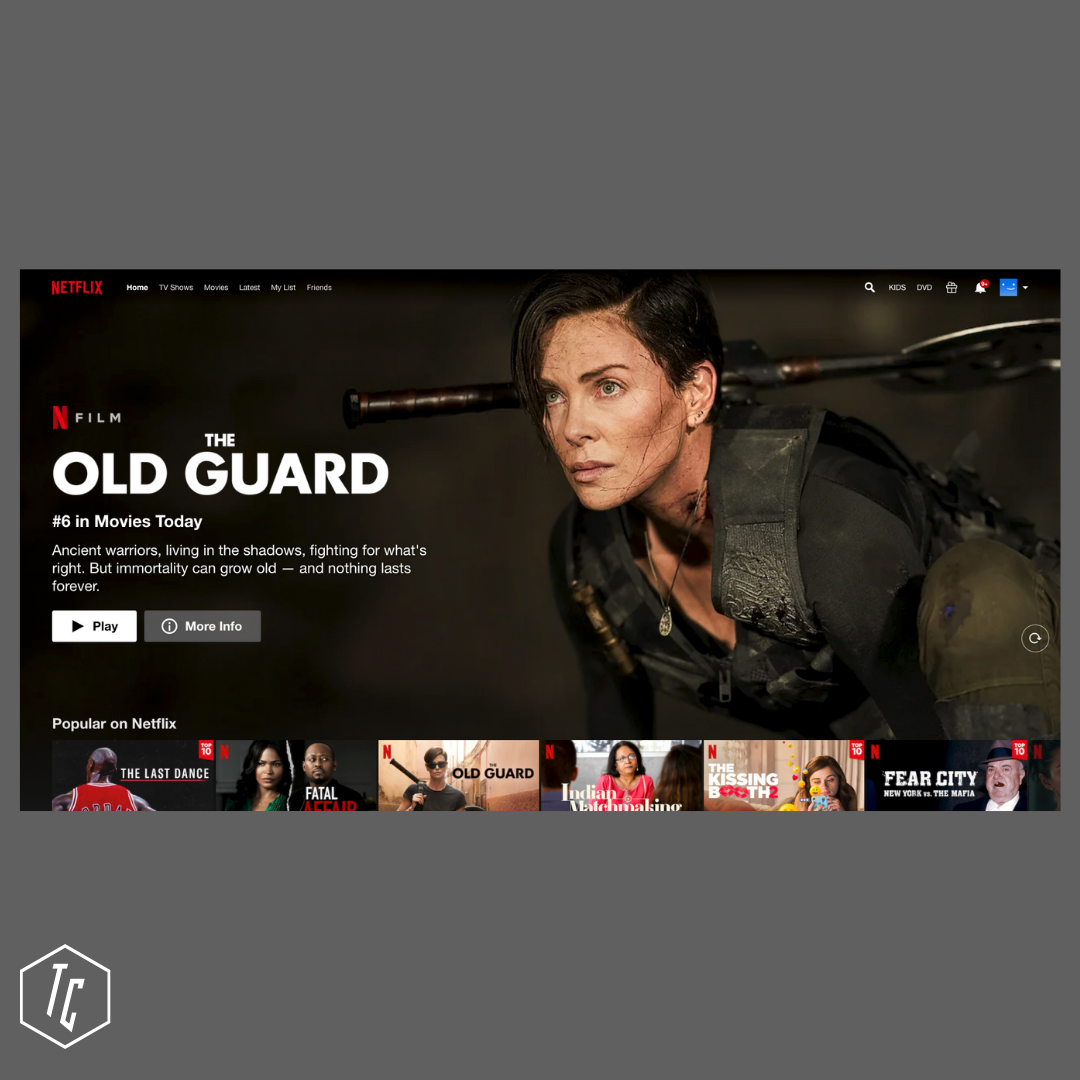 This idea was inspired by the recent creation of the google chrome plugin "Netflix Party". I'm an avid user of the Netflix desktop application and I have used the Netflix Party plugin but it got me thinking. Why isn't there a feature native to Netflix that facilitates interaction between its users to have a watch party or movie night.

So, have you ever been on Netflix and wanted to watch a movie with someone or a group of friends but because it's quarantine season until further notice right now, you don't want to risk it? So, you use FaceTime but it kind of takes you out of the experience of watching the show. This is an issue one of my friends recently brought up. There is no friends activity or watch party feature available on Netflix and right now in these times where the world has been mostly closed off from in-person communication, there is a market of people who would love a feature like this as shown by the buzz around the Netflix Party plug-in. 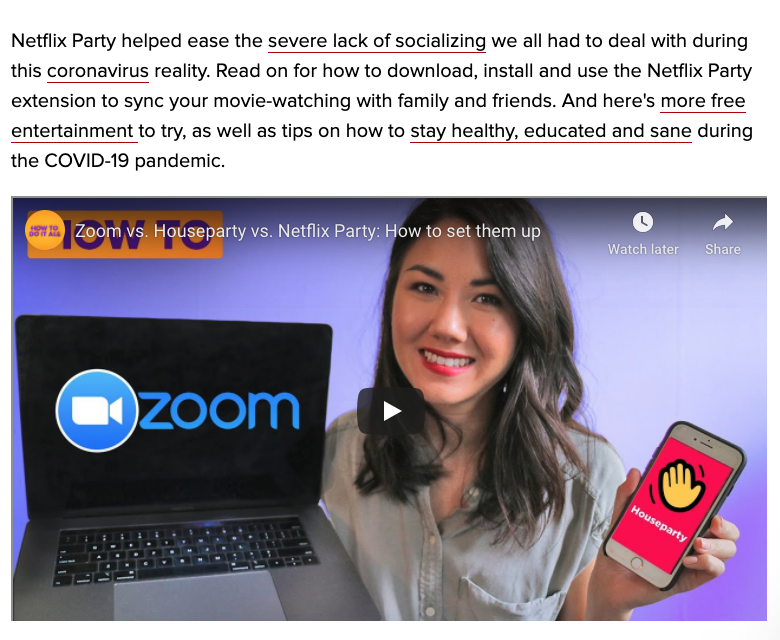 Now, you might be saying okay why not just use the Netflix Party plug-in then. But one of my friends brought up the point that it's not the same because you can only type/text using the Netflix Party plug-in. So, being a gamer myself I said "Why not just download and use an app like Discord" which allows you to stream and watch things together using audio and video. But then another one of my friends brought up another point saying that they don't want to have to download yet another app and they wished Netflix just had a feature like that already. So, I saw an opportunity to do a little project. This was the result.

I started out by trying to think of a way to integrate a feature like this seamlessly into the current flow of Netflix because the web app already has a good design. I wanted people to really feel like they are connected to each other and make this feature more appealing to a friend group for example. While I was brainstorming how I would do this, I decided to take a break and hop on my PlayStation, and while on my Playstation about to create a party for my friends and I, the idea came to me. PlayStation's friends feature is exactly the kind of user flow that would solve my dilemma. It allows you to search for others, see your friends' activities based on their preferences, start a party with a friend, jump in to watch your friend play a game and of course send friend requests. So, I mirrored the way the PlayStation goes about this and incorporated it into Netflix's current design. 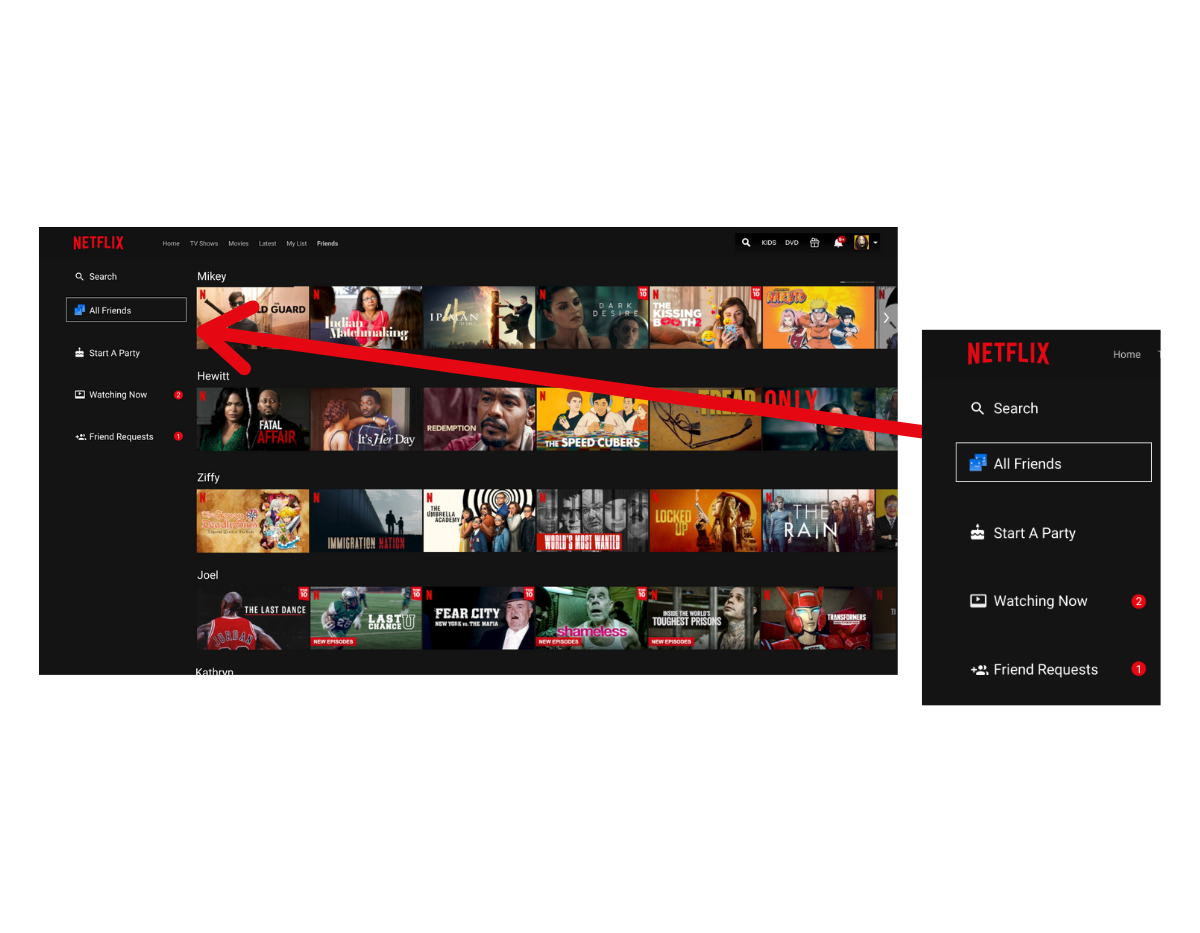 See what your friends are watching

Being able to see what your friends are watching on Netflix is an interesting idea that some of my friends were open to but of course, some were not. Here you will be able to see what your friends have been watching and if they've been watching your show without you 🙃 . This is of course only possible if they allow you to do so in their privacy preferences 😉 . 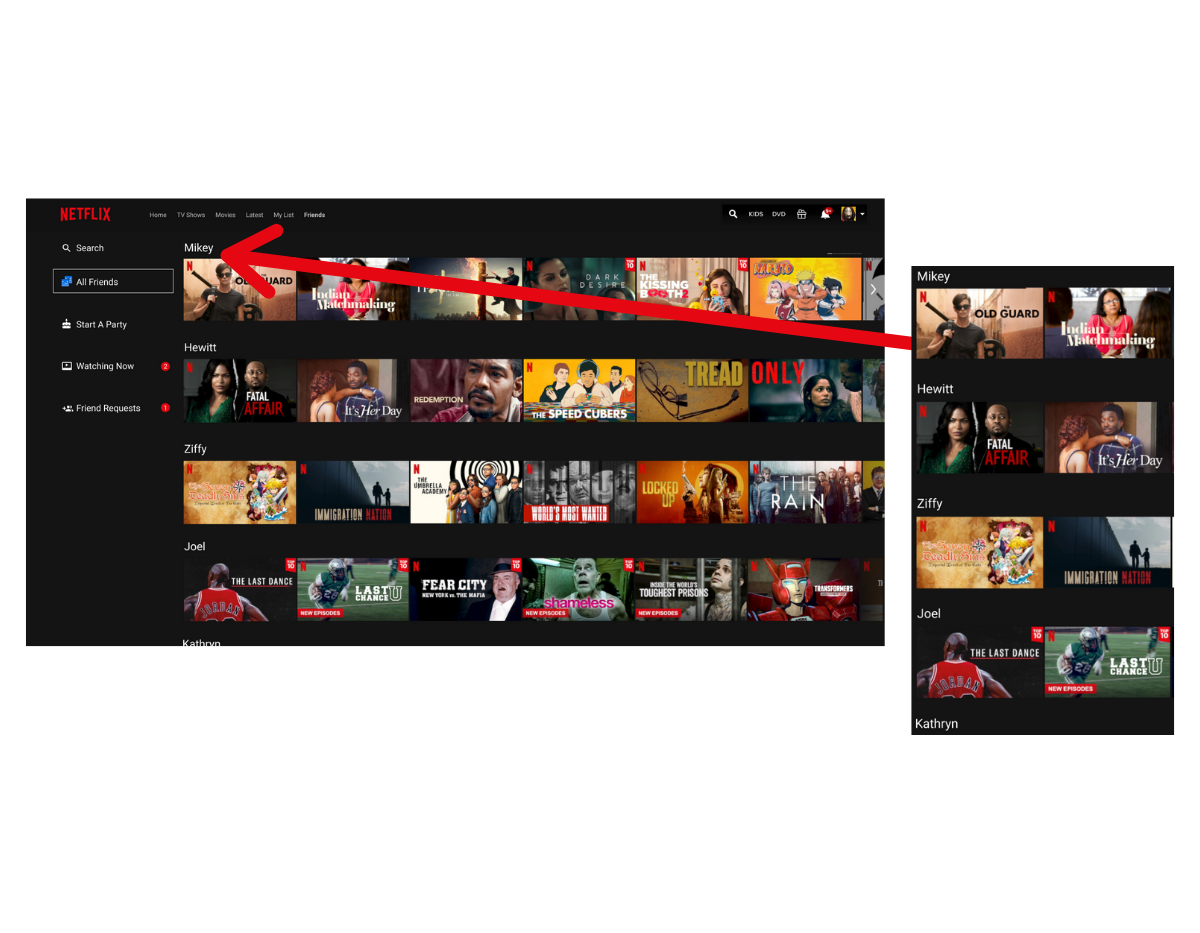 "Alexa, play Start A Party by Rae Sremmurd" - 🤪 . So, you want to watch Extraction on Netflix with your friends. Here you see a view of what it would look like to be in a Netflix Party with your friends. You will all have the option to show video and/or talk as well as choose who you want to hear/see if there's that one friend who talks too much but you also have the option to just use the chat and collapse this media "curtain" to get more room for the show. While here you will also be able to invite more of your friends to join the party. I did my best to make this feature as functional as possible, and not to take too much real estate away from the show that you and your friends are watching because at the end of the day the last thing I wanted to do was take too much away from the experience of watching your show. 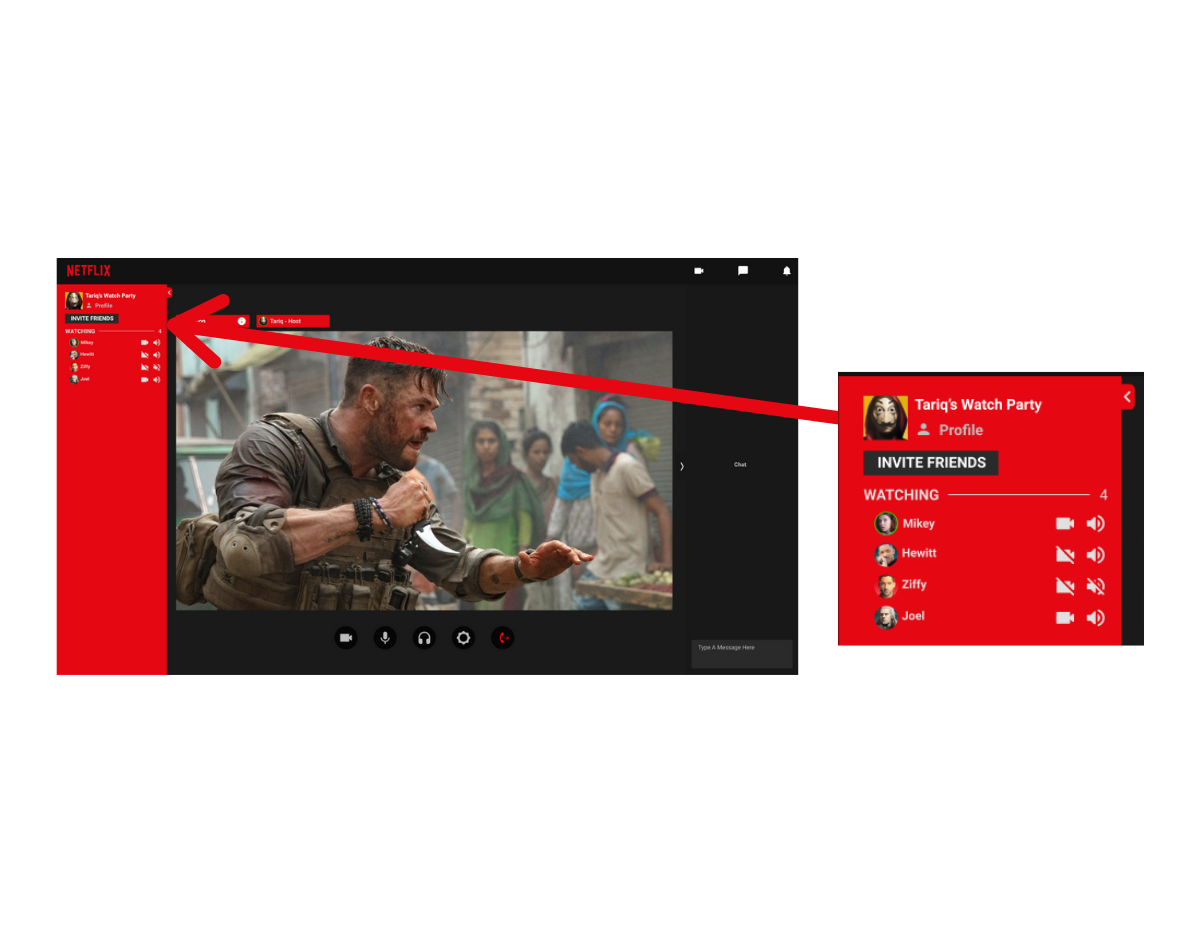 Here is the second media "curtain", where you would be able to chat with friends but also be able to switch to show live video feeds of your friends in a similar fashion to how Discord works when in a video chat. 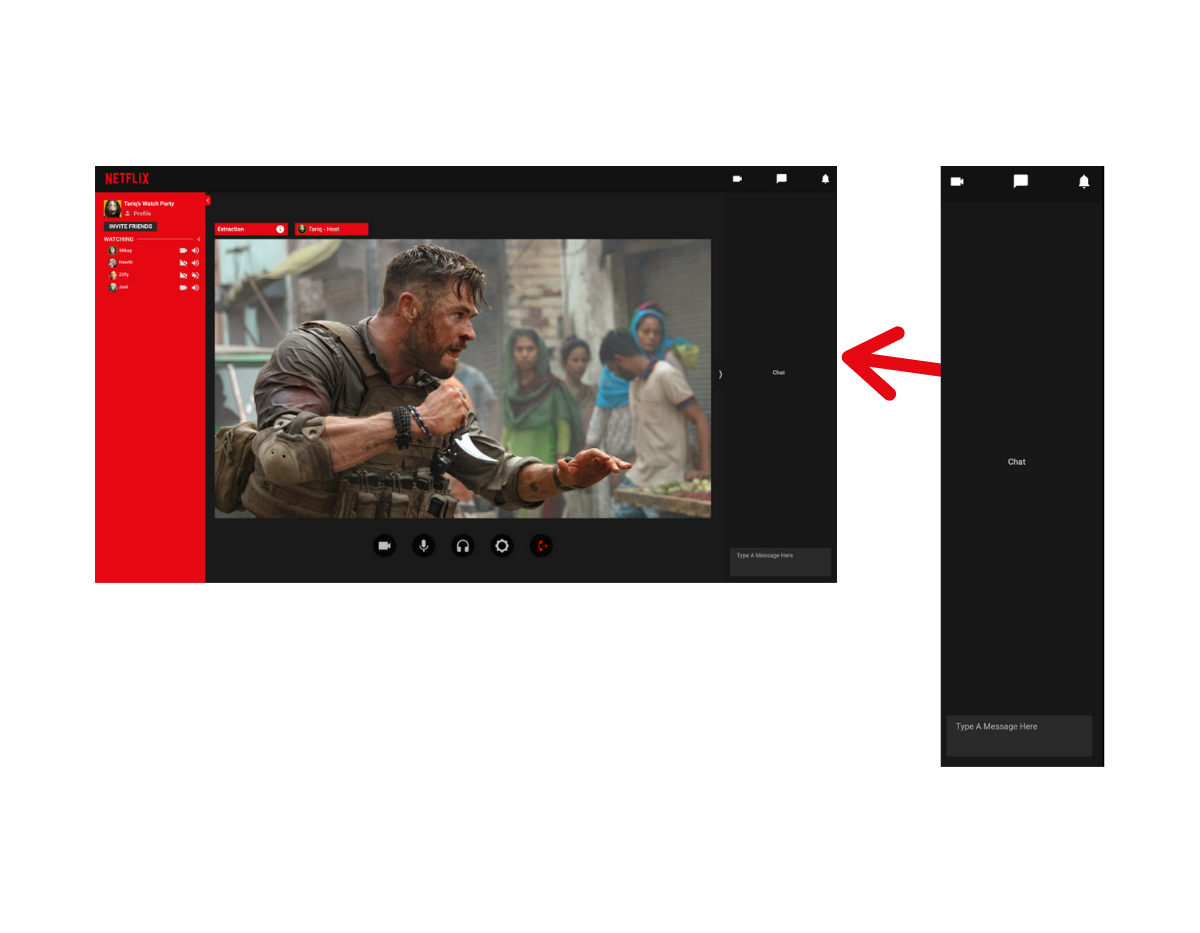 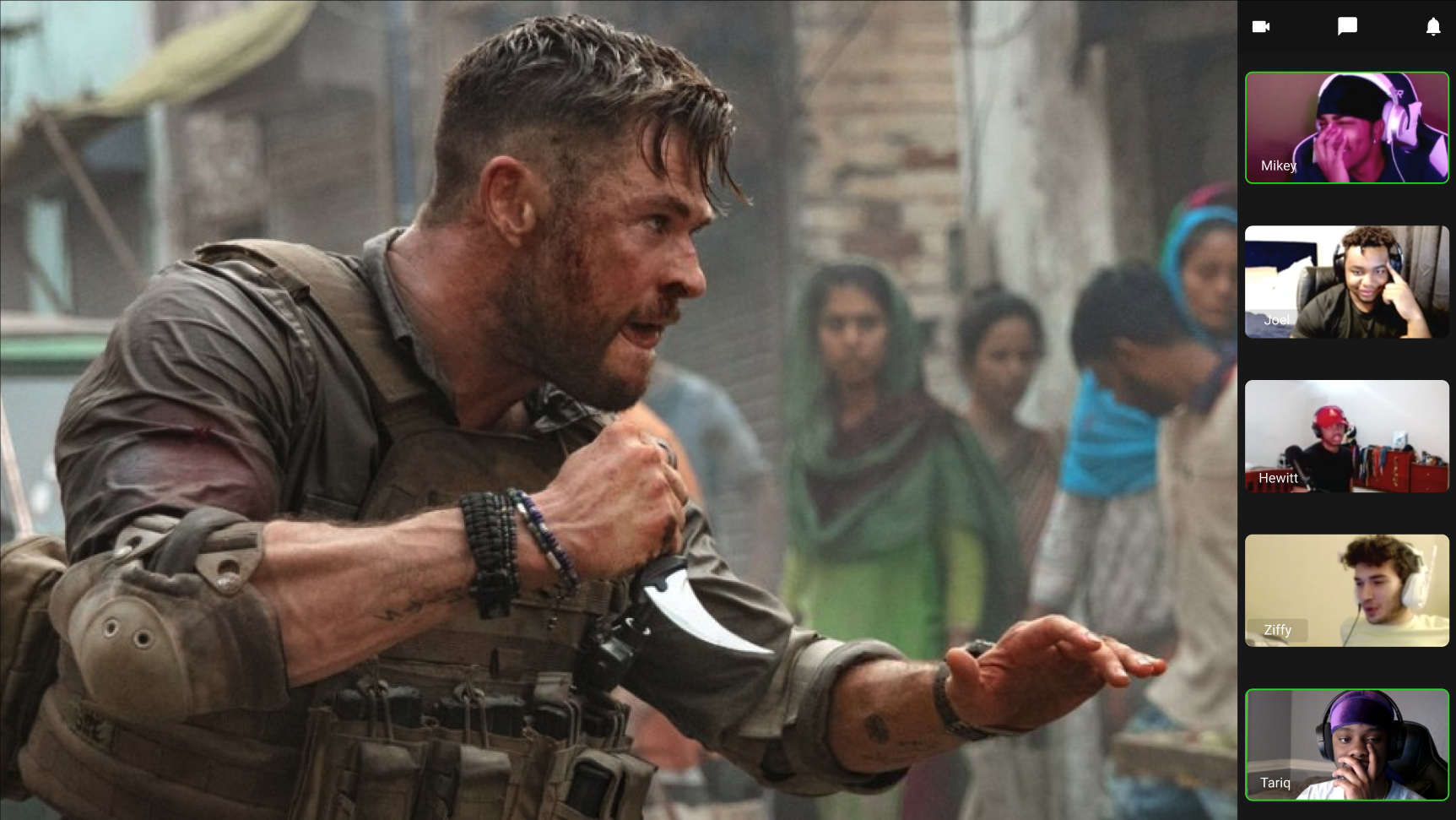 A multi-faceted "Friends" feature that allows users to interact with each other using video and audio to watch their favorite shows/movies with each other from the comfort of their own homes. 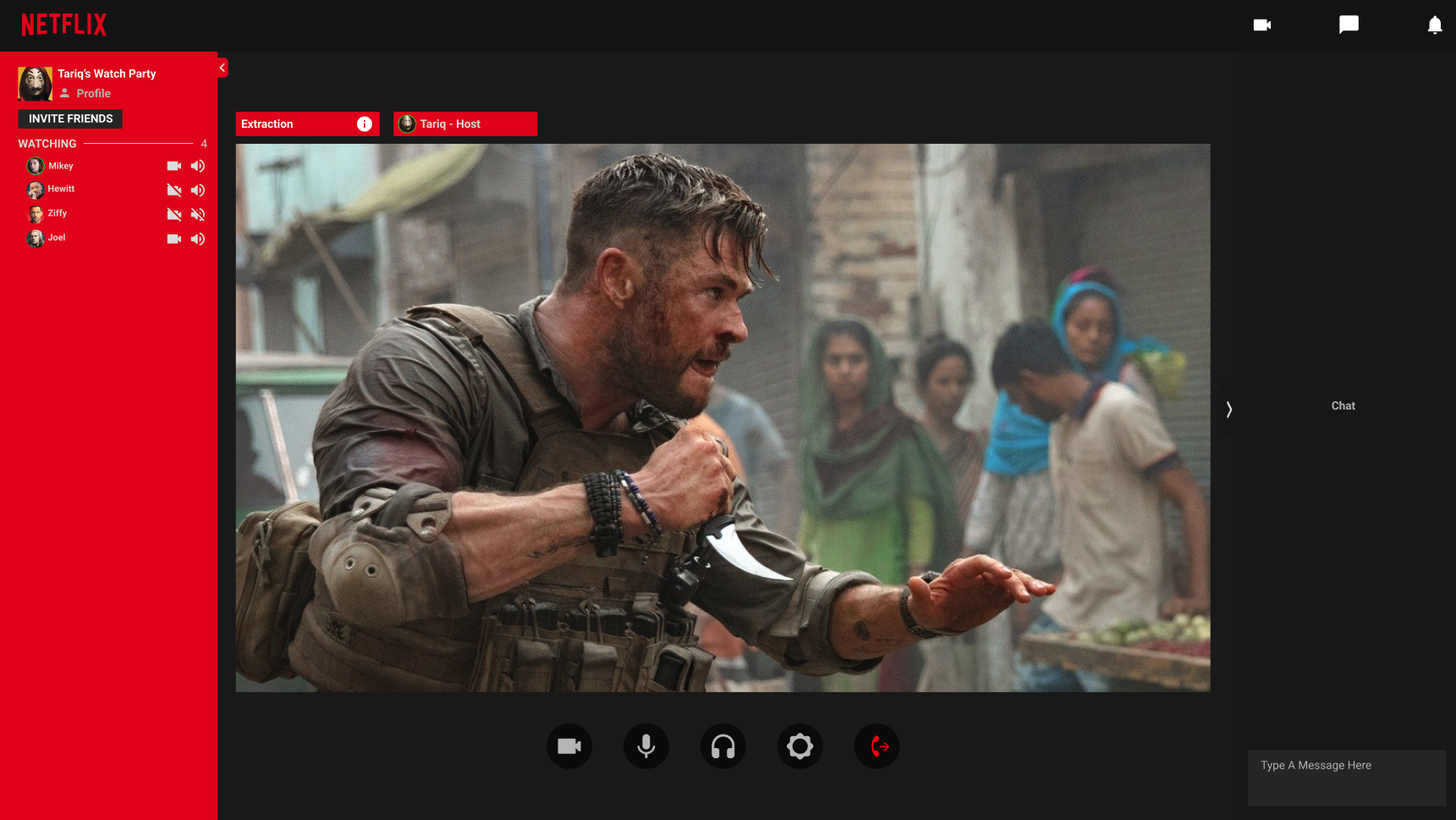 During this pandemic, people are being forced to find different ways to interact and connect remotely. The movies, for example, nobody can go to movie theatres anymore. Therefore people are turning to streaming platforms such as Netflix, Hulu, Disney Plus, etc. This pandemic has created an opportunity for companies to try different things.

So, what I learned from this study is that people are looking for new ways of interaction on platforms they are already familiar with. So, in the case of Netflix, what better way to make this idea a reality than to add a “Friends” feature on Netflix that allows peers to interact and watch movies/series together from the comfort of their own homes. I believe that this is a great idea for both the user and the company because for the user it creates a new form of interaction with others and for Netflix, it would give them a unique feature to market and attract new users to their platform. 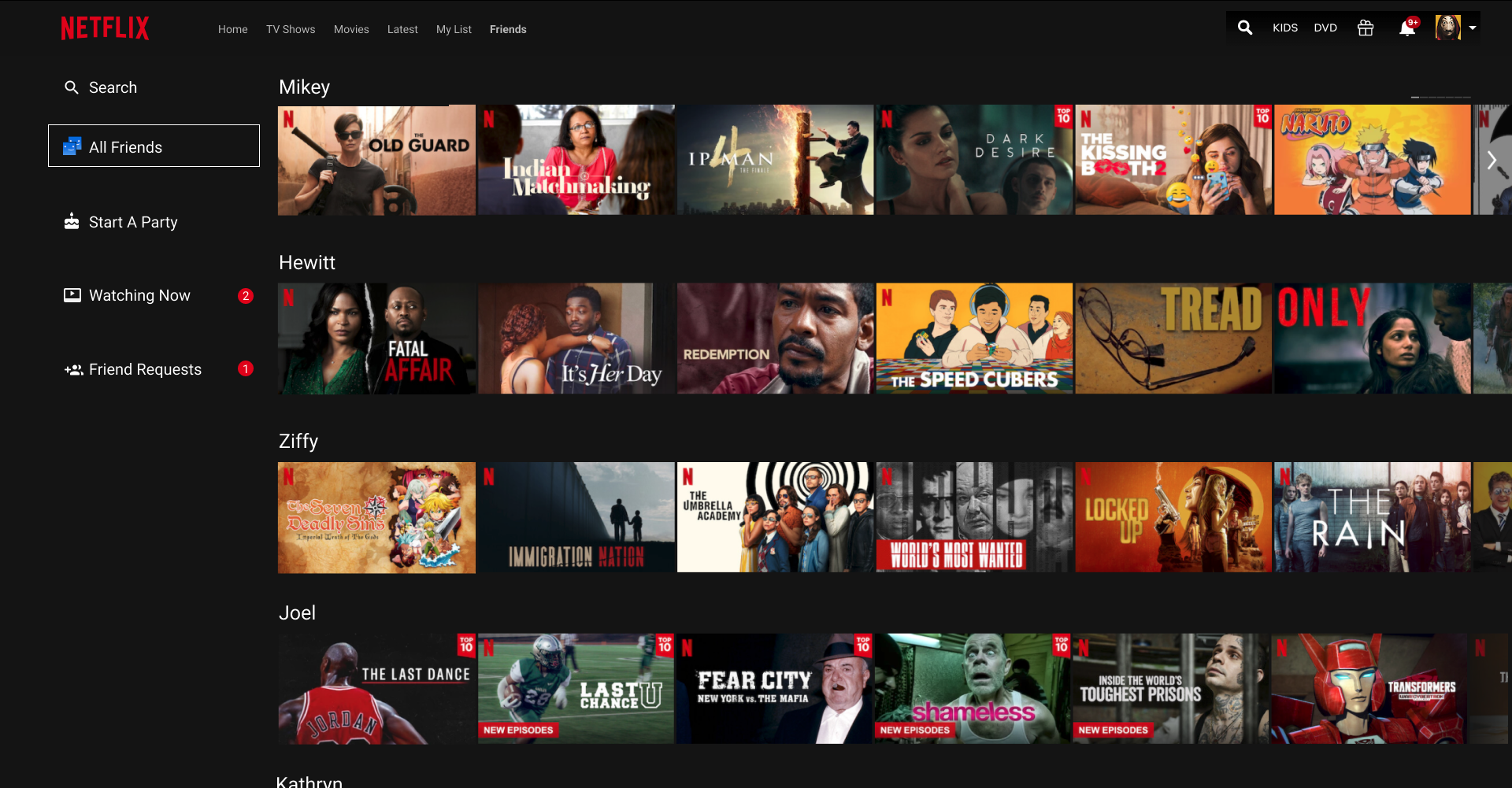 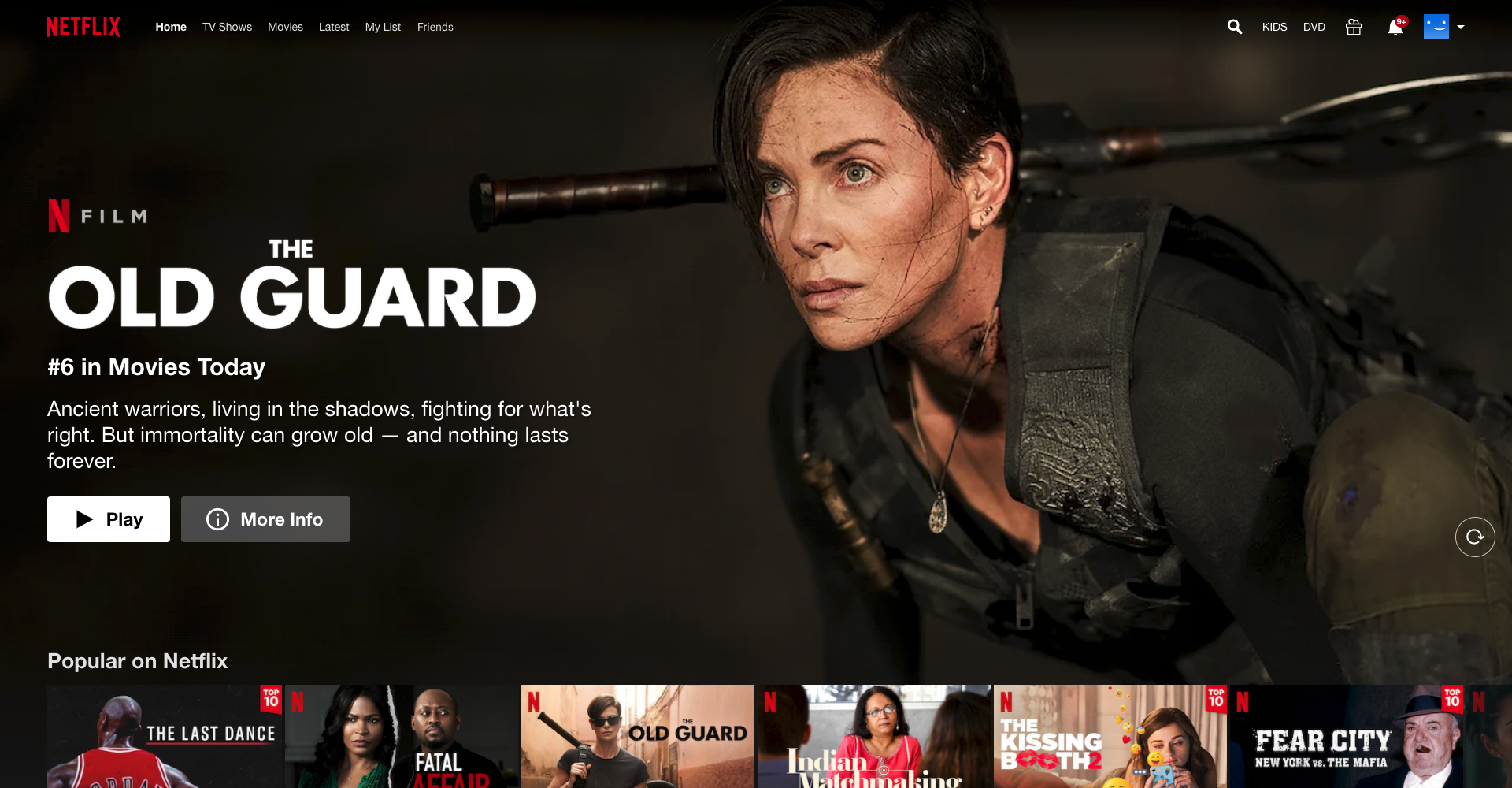 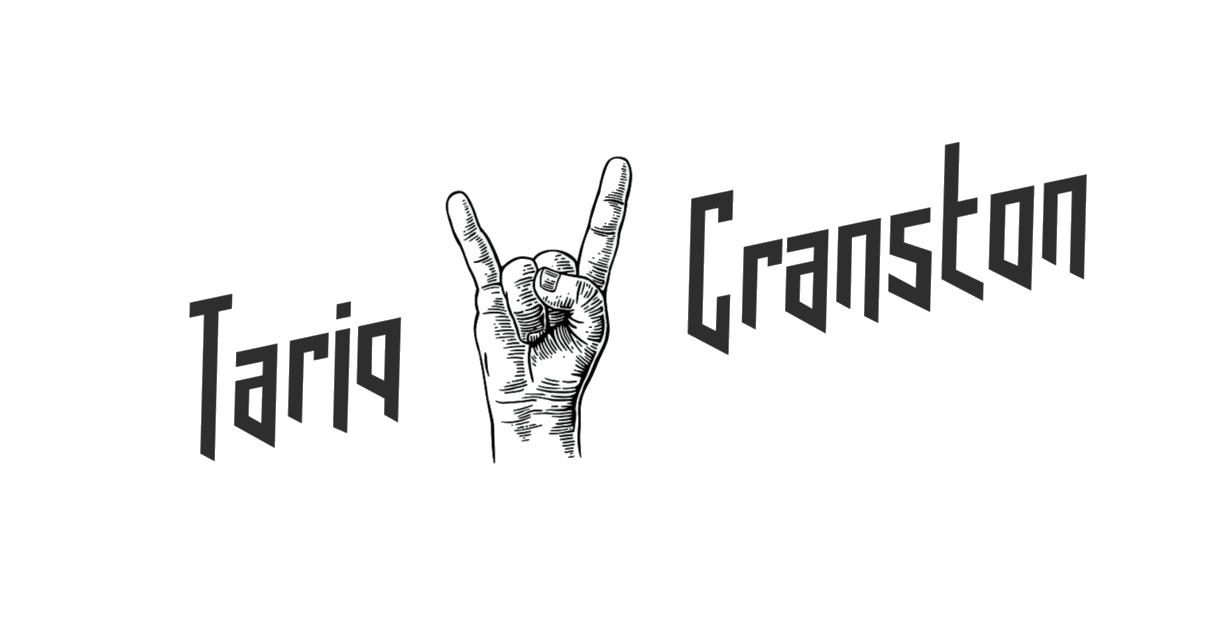